São Tomé e Príncipe
On the Equator, in the Gulf of Guinea

São Tomé e Príncipe, the second smallest country in Africa, lies south of the coast of Nigeria and west of Gabon in the Atlantic Ocean.

The country has about 210,000 inhabitants, with about 90% of all inhabitants living in the north-eastern area around the capital Cidade de São Tomé and only a few thousand on the smaller island of Príncipe. In the far south is the smallest island of Rolas, where just over 100 people live. This is where the equator runs. About 30% of the area of the two main islands is protected national park with tropical rainforests and coastal forests.

The country is a living democracy with good and peaceful relations with the world. The most important economic sector is tourism. São Tomé e Príncipes’ main exports are coffee and cocoa, often from certified organic cultivation and of top international quality.

São Tomé e Príncipe can be reached from Europe in about 6 hours from Lisbon several times a week by direct flight. 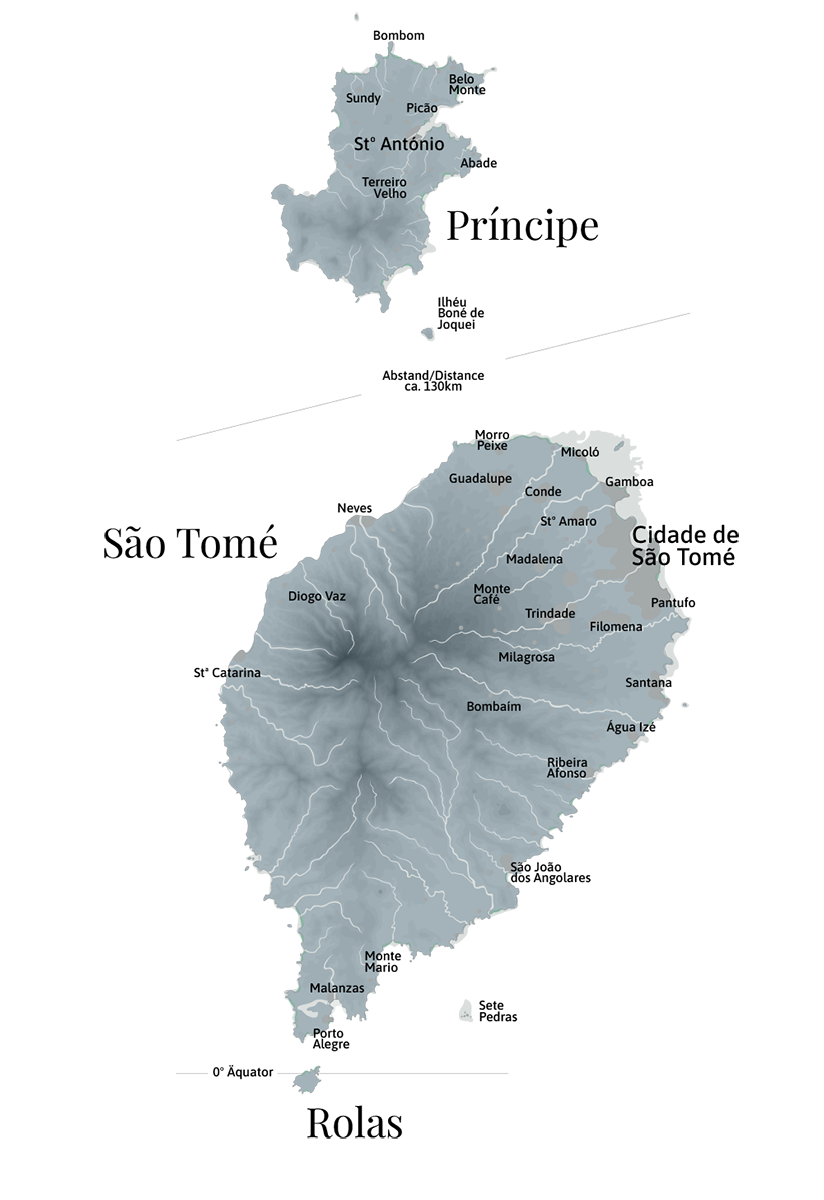 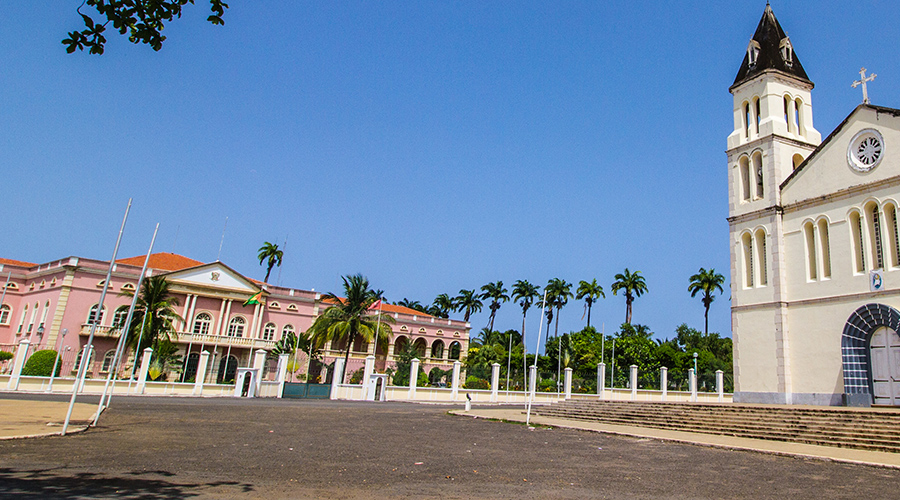 Between Africa, Europe and Brazil. For centuries.

According to European historiography, São Tomé e Príncipe was uninhabited until its discovery around the turn of 1471/1472. For many hundreds of years, the islands served as a transhipment point for the slave trade. On the backs of these slave and later contract workers, numerous large plantations, so-called roças, were established. These roças are still signs of the colonial power’s past wealth today. Since 1975, São Tomé e Príncipe has been an independent democracy, culturally and politically still the closest to Africa, Europe and Brazil.

The nature of São Tomé e Príncipes is unique and a wild mixture in the truest sense of the word. The world’s largest begonia grows here and the world’s smallest colobri flies. Large parts of the islands lie in the inaccessible valleys, full of tropical forests with introduced and original plants. Jackfruit (called “jaca” here), coconut palms, mango trees and breadfruit are among the better known. Whales, turtles and flying fish live in the sea around the islands. Eco-lodges and sustainable tourism projects are trying to bring man and nature into harmony, and Príncipe Island is now a UNESCO biosphere reserve. 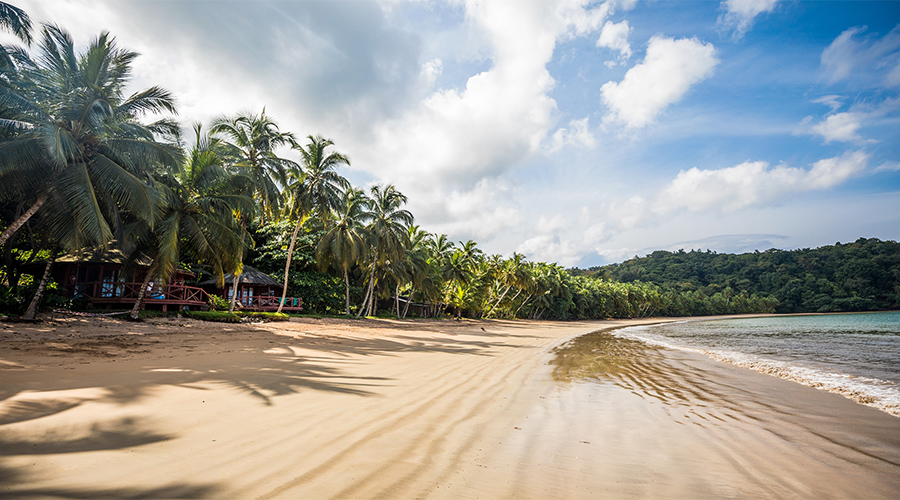 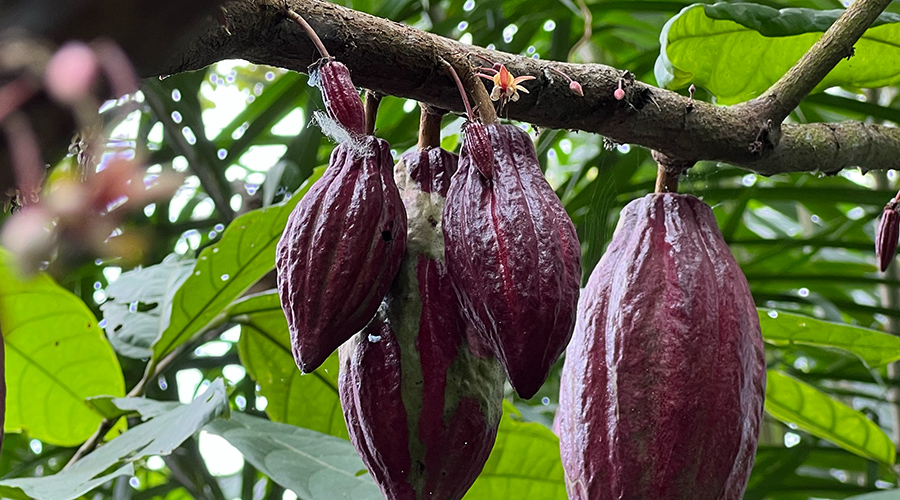 Cocoa and coffee from cooperatives, high quality and certified organic.

São Tomé e Príncipes’ main exports are cocoa and coffee, as well as some other agricultural products. The country now successfully sells high-quality products from these sectors all over the world. The Claudio Corallo chocolate is known to gourmets worldwide and is only produced in São Tomé. More than 5,000 families have joined together in the CECAB cooperative to export controlled organic cocoa and are building another factory. You can buy mountain coffee from Monte Café and there are vanilla and ylang ylang plantations.

Before Alda Neves da Graça do Espírito Santo wrote the anthem, she fought for the independence of São Tomé e Príncipes and helped investigate the crimes of the Portuguese colonial administration at the Batepá massacre. Yet her work is peaceful and is also about the “warrior without a weapon in his hand”. An excerpt:

Warriors of war without weapon in hand, Watchful flame in the people’s soul, Unite the island sons, For the immortal homeland, Complete independence, total and complete, Building on progress and peace, The most devoted nation on earth, With the heroic arms of the people 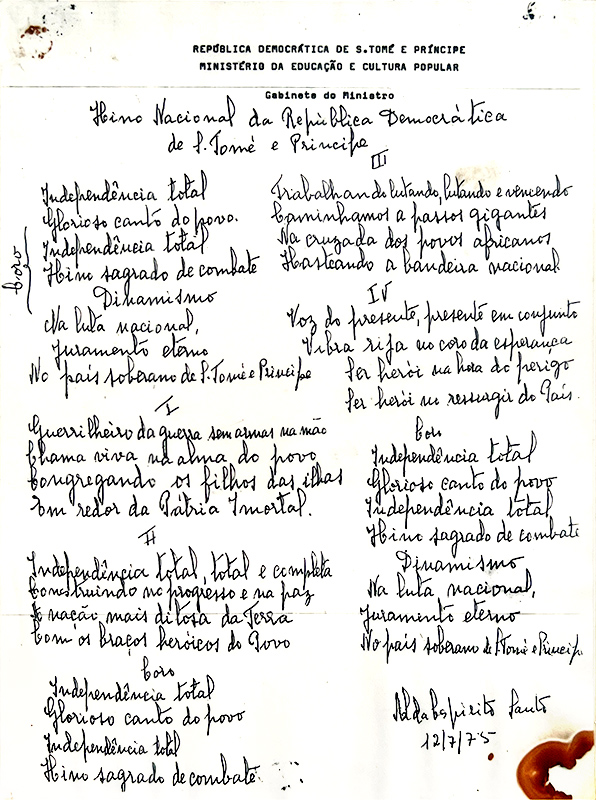 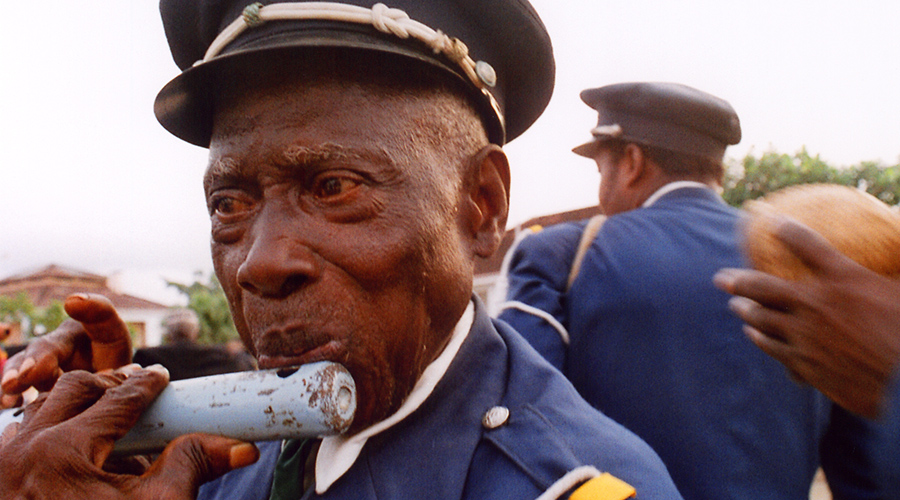 Tchiloli, Dança do Congo, Auto de Floripes and a culture all of its own

The culture of São Tomé e Príncipe is a very unique Creole mixture of influences from three continents. Famous are the various street theatres such as “Tchiloli” or “Car of the Floripes”. The latter can run for several hours and is actually based on a story about Charlemagne, but also reminds one of Brazilian carnival or a music event. Most places in the country are named after saints or have a patron saint, and their name days are celebrated in lavish local festivals.

Since the 1990s, São Tomé e Príncipe has been a cosmopolitan and modern democracy, with a critical media landscape, numerous public debates and changing governments. There are numerous investments from a wide range of countries. Diplomatic relations with Europe are close and Germany also plays a special role, as some important projects were initiated by Germany and some Santomensen studied in Germany. 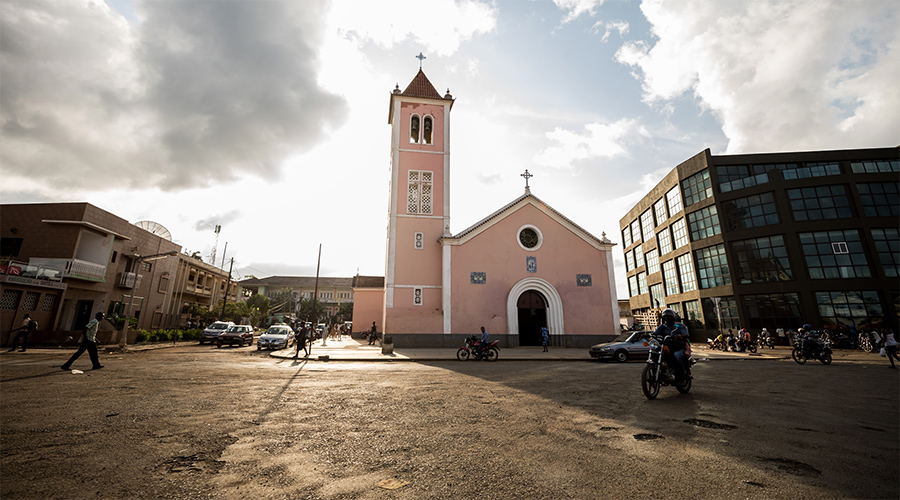 In the centre of the capital (Photo: Dário Pequeno Paraiso)